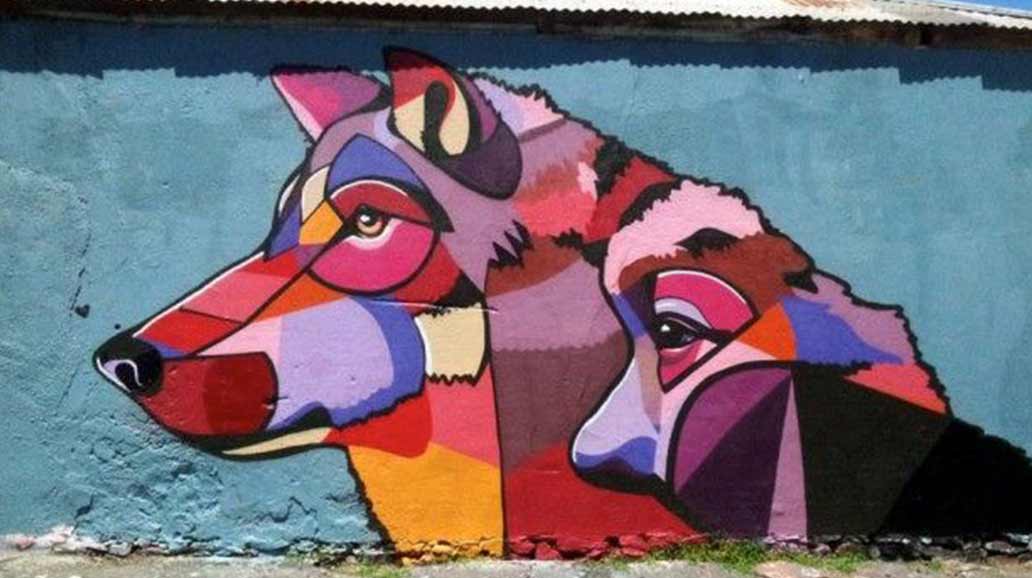 Since the beginning of time art has been used to inspire, express a message or convey a story that hopefully will evoke the emotions and thoughts of those who visually perceive it. Graffiti’s tale is as old as time: from early cave paintings to the ancient scribbles of the Romans and Greeks whose prevailing themes were around politics, sex, money and wine. Centuries later in the 1960’s Philadelphia and New York gave birth to a new graffiti art era, which shaped and inspired the modern graffiti that we see all around us today. And what better place to check out street art than in Cape Town?

Street art in South Africa started in the 1980’s in the Cape flats area, an area created by the Apartheid Regime to serve as a dumping ground for people of colour that had been removed from their homes following the instatement of the Group Areas Act. The relocated people who lived there had experienced injustice and had a passion to fight against it. Much of the graffiti that flowed out of the Cape Flats and around the city at that time was political and used as a tool to call for the release of prisoners during the Apartheid regime (with “free Mandela” being the popular tagline of the resistance). Back then, graffiti gave people a platform to voice their opinions against the harsh laws that oppressed and racially discriminated the people of South Africa.

Today graffiti is mostly seen as a negative that degrades a community with walls and infrastructure riddled with vandalism, tags and poorly done throw ups and graffiti pieces. But now there is new light appearing around this urban art form and it has taken a surprisingly positive turn and is now being used to uplift and urbanise the fast growth of the Woodstock area.

Situated between Devil’s Peak and the Atlantic Ocean, Woodstock has always been a host to many mixed races and religions and somehow managed to avoid the forced removals under the Apartheid regime unlike its neighbour District Six, whose residents lived and worked through the horrors of it.

Over the decades, Woodstock fell into a state of disrepair and became overrun with crime and drugs, with the buildings sustaining major decay and neglect. However, Woodstock’s story has taken a positive turn and the area is in the midst of a revival, attempting to repair itself with art, food and culture and is now a host to some of the best restaurants in the city! One such example is The Test Kitchen, proudly ranked #22 amongst the world top restaurants. Woodstock has also become the art Mecca of Cape Town, drawing international artists from around the world to come to paint its walls and has earned the title of Cape Town Innovation Hub.

Because of this cultural revival, Explore Sideways is excited to add a new Woodstock Street Art and Graffiti walking tour lead by a local artist and guide. This immersive experience starts at the Woodstock Exchange building, which has been dubbed an innovation and design hub in Cape Town. Make sure to pickup an artisanal coffee from Rosetta Roastery before heading out onto the colourful streets. As you make your way through the surrounding side streets, your expert guide will explain the history and objectives imprinted by each of the art murals. Completed by many different local and foreign artists, each art piece depicts a special meaning. Symbolism ranges from animal conservation and awareness of South Africa’s endangered species that are facing extinction, to South Africa’s ongoing fight for freedom, liberation and equality.

You’ll be nothing short of inspired by your guide’s passion and love for the area as he breathes life into the stories of the history and current affairs of Woodstock. The pulsating energy of the area and its vibrant inhabitants are alive and blossoming with change and community, and is the perfect starting point to experience street art in Cape Town.

Want to know more or have any questions, let an Explore Sideways expert help you plan an experience you will never forget!

Speak To An Expert